Toni Watson, known professionally as Tones and I, is an Australian singer and songwriter. Her breakout single, “Dance Monkey“, was released in May 2019 and reached number one in over 30 countries.

In 2019, she broke the Australian record for the most weeks at number one on the ARIA Singles Chart by any artist with 16 weeks. By mid-January 2020, “Dance Monkey” had spent its 24th and final week at number one, beating Bing Crosby’s all-time Australian record for his version of “White Christmas“, which spent 22 weeks (five months, namely June to October) at the top spot in 1943.

“Dance Monkey” was accredited 13× platinum by ARIA for shipments of over 910,000 units, in October 2020. Tones was the most awarded artist at the ARIA Music Awards of 2019, winning four from eight nominations. Tones and I released her debut extended play, The Kids Are Coming, on 30 August 2019, which peaked at number three in Australia.

Toni Watson grew up in Mount Martha on the Mornington Peninsula in the Australian state of Victoria.[3][4] Conflicting reports state she was born either in 1993 or in 2000.[5] The artist prefers not to disclose her birth details, “I never denied my age. I never lied about it. I just don’t say anything now… Everything is wrong online.”[6]

She explained choosing a music career: “One day I was at the park with my family, all my cousins and stuff, in Frankston… We were all just singing a song and my aunty was like ‘oh guys, she can actually hold a note.’ I think that’s the earliest memory of someone actually pointing me out as someone that has an ability to sing. I was probably like 7 years old.”[7] The singer-songwriter had learned to play keyboards and drum pads while at secondary school.[7] She started busking in Melbourne, while working in fashion retail at the Universal Store.[3][4][8]

In 2009, as Toni Watson, she created a YouTube page and posted a cappella cover versions of songs.[5] She performed local gigs and festivals, including the Let Go festival.[3] Tones was the vocalist for a duo in 2014,[3] and remembered: “I started out singing in small pubs and bars in Mornington, I was singing along to a guitarist until I ended up branching out on my own.”[9] She explained her shift to a solo career: “I actually got made redundant from my retail job and with that money I bought an RC300 (loop station) and just started to try to figure it all out.”[7] She busked “up and down the east coast with her synthesisers and loop pedal, she has been building a loyal fanbase and captivating crowds with her genre-diverse style.”[3]

In September 2017, the singer-songwriter travelled to Byron Bay in the Australian state of New South Wales to try busking there.[7][10] At an early performance, she met Jackson Walkden-Brown who became her manager about a month later.[7][10][11] Her busking success led to a greater commitment to a music career. The artist spent 2018 living between Walkden-Brown’s home in the Gold Coast hinterland and in her van in Byron Bay, writing music and busking full-time.[8][10] Later that year she won the Battle of the Buskers at Buskers by the Creek.[7][12]

In February 2019, Tones and I signed to Bad Batch Records/Sony Music Australia alongside a co-management deal with Artists Only (owned by Walkden-Brown, ex-Aerials) and Lemon Tree Music (co-owned by Regan Lethbridge and David Morgan, both ex-Bonjah).[8][13][14] In that month she uploaded her debut single, “Johnny Run Away“, to an Australian website affiliated with Australian national youth radio station Triple J, called Unearthed, which publishes the music of unsigned artists.[15] The track was recorded with Australian producer, Konstantin Kersting.[16] AllMusic‘s Fred Thomas observed, “[it] became a viral sensation, racking up streams.”[17]

On 10 May 2019, Tones and I released her second single, “Dance Monkey“.[21] She recalled the track was “Written alone in a dark closet in not much more than 30 minutes.”[10] Craig Mathieson of The Age felt, “It’s pop writ large – catchy yet familiar, slightly ludicrous yet genuinely affecting.”[22] It reached number one on the official music charts of over 30 countries, including Australia, Austria, Belgium, Canada, China, Denmark, Finland, France, Germany, Ireland, Israel, Italy, Japan, Malaysia, the Netherlands, New Zealand, Norway, Portugal, South Africa, Sweden, Switzerland and the United Kingdom.[23][24][25]

“Dance Monkey”‘s music video was directed by Liam Kelly and Nick Kozakis.[26] In Australia, in November of that year, she broke the record for the most weeks atop the ARIA Singles Chart by any artist, with 16 weeks. This was previously held by Ed Sheeran’s “Shape of You” (15 weeks in 2017).[24] By mid-January 2020, “Dance Monkey” had spent 24 weeks at number one.[27] It was the first Australian song to reach number one on Spotify‘s global daily top 200 streaming chart.[28] On 8 February 2020, it equalled Post Malone’s “Rockstar” for the most days at number one on the same chart.[29] As of 18 February 2020, “Dance Monkey” returned to the Spotify top spot and had spent 120 days at number one.[30] 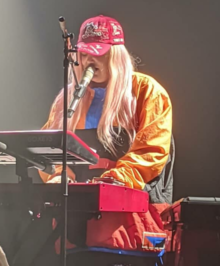 On 1 February 2020 she started her Kids Are Coming World Tour with five Laneway Festival dates in Australia and seven dates in North America.[38][39] Riff Magazine‘s Rachel Goodman caught her performance in San Francisco in mid-month, “[she] brought a palpable energy to the stage, which concertgoers enthusiastically reciprocated… [and] spoke about busking every day on the streets of Byron Bay in Australia and how she learned to communicate with audiences—and quickly capture people’s attention.”[40]

A total of 52 dates (including another eight in North America) were announced for the tour through to July.[38][39] However, due to the COVID-19 pandemic local tour dates were rescheduled to April 2021.[41][42] Likewise, the artist curtailed her European performances, “I must cut short the rest of my first tour over here, as the majority of the remaining shows have already been cancelled due to government policy and I do not want to subjugate anyone to making a choice between coming to see me and their health.”[43]

On 7 May 2020 Triple J premiered a new song, “We Can’t Wait to Go Back to a Festival When This Is Over”, as part of a COVID-19 self-isolation musical challenge, Quarantune.[44] On 20 May “Dance Monkey” reached 1 billion views on YouTube.[45] Also in that month the artist appeared on the cover of Rolling Stone (Australia) and was interviewed by its managing editor, Poppy Reid.[46][47] Reid had seen her at the Laneway Festival in February, “there’s a manic energy and excitement surrounding her at all times… [she] offers a new blueprint for future generations… the possibility of a global career built out of regional Australia, sans a major label… and without a stack of co-writers.”[6]

During August the singer, and her management, sponsored an Instagram-based competition, That One Song, which featured a different developing artist each day, “to share original content” on her account.[48][49] After 2 September the finalists were voted for by the public, from the 20 artists previously show-cased.[49] Tones and I co-headlined a virtual concert, with Gary Clark Jr., on 5 and 6 September 2020.[50][51] The performances were fund raisers for the Equal Justice Initiative and were streamed live on various media channels.[50][51] The artist also announced in September that her debut album is expected in 2 or 3 months, “I’ve taken the time to just really make sure it’s what I want. And I want to add more music to the album. It will be my first ever album, so I really want to make sure I’m proud of it.”[52]

From Wikipedia, the free encyclopedia

Jump to navigationJump to search

Peter Bence (Hungarian: Péter Bence; born 5 September 1991) is a Hungarian pianist, composer and music producer. He has gained considerable popularity with his piano arrangements of Despacito (Fonsi/Yankee/Ender), Michael Jackson, Queen and Sia collecting over 500 million video hits and a popular following on his YouTube channel and Facebook page. His most viewed video of all time is his lively rendition of “Despacito.”

Bence holds a Master of Arts in Film Scoring and Electronic Production & Design from the Berklee College of Music (2010-2015)[1]. Between January 2012 and March 2017 he held the world record for most piano key hits in one minute (765) according to the Guinness book of records.[2][3]

Peter Bence started playing the piano at an early age and finished his first own composition, at age 7, which was heavily influenced by the music of Mozart and Chopin. In 2002, at 11 he published his first solo piano album of his early compositions called Green Music. In 2008 he released his second album Nightfall.[citation needed] The sheet music for his composition Piano Piece Based on Fibonacci Sequence, an audition piece performed in 2009, was requested by many pianists. He was considered a musical prodigy by teachers and peers, and was already accepted at Franz Liszt University of Music in Debrecen, while he was still enrolled at elementary school.

In his teens, Peter started to show great interest in film music, especially the music of John Williams, which has opened up a new world for him and made him further explore himself musically.

After his training in classical piano and composition in Hungary, he continued his studies as a scholar at Berklee College of Music in the United States as a film scoring and piano major. Even though he was taking in every genre of music possible, he found his biggest influence in Michael Jackson.

In January 2012 he attained the Guinness World Record for the “most piano key hits in one minute” with 765 key hits, which he held until March 2017.

Peter began uploading videos to YouTube while at Berklee and in 2015 with his arrangement of Michael Jackson’s ‘Bad’ he quickly rose to fame, collecting 10 million views over a few days. Now he has over 500+ million cumulative video views on Facebook and YouTube combined. In the past two years alone he has performed for tens of thousands throughout 40 countries, opened BBC’s Proms in the Park 2017, in Hyde Park, London for 50,000 people, and was featured on the Ellen DeGeneres Show’s website, BBC, Buzzfeed, 9GAG, Classic FM, iHeart Radio and Billboard. He is currently finishing his debut album, which will feature some of his best covers and solo piano compositions.